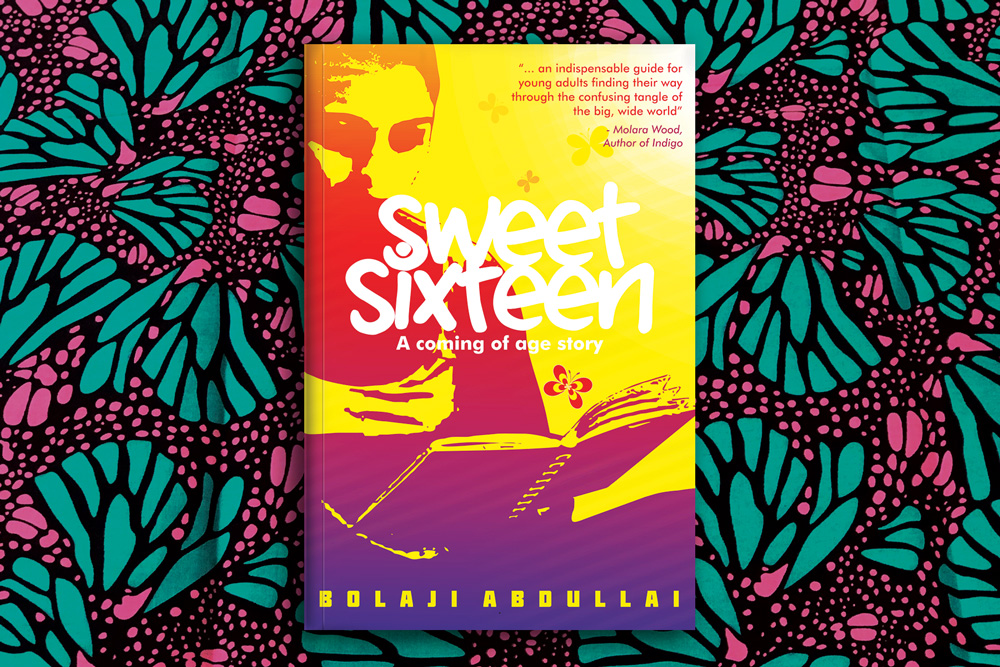 In Bolaji Abdullahi’s Sweet Sixteen, the protagonist, 16 year-old Aliya, whom her father refers to adoringly as ‘My First Lady,’ bombards her journalist father with questions some of which throw him off balance.

“Okay Daddy what does HAK and KOTL mean?” Aliya asked. And when the father expressed his ignorance of the teenage acronyms, Aliya gleefully supplied them; “HAK means ‘Hugs and Kisses’ while KOTL means ‘Kiss On The Lips’. And when she added that some students were caught on the school’s basketball court at night having ‘’53X’ (sex), Mr Bello almost fainted. “But…how do you know all these?” he asked almost in consternation to which Aliya replied; “Come on, Daddy, everybody knows these things.”

In his debut fictional work, Bolaji Abdullahi, who has written extensively over the years on politics, policy and development laid bare in an absorbing page-turner, murky truths and hitherto unspeakable issues in the ever challenging world of teenagers and young adults.

Divided into seven sections; The Letter, The Drive, Work, The Gandhi Test, Dating, Stereotype and Beauty, Sweet Sixteen’s central focus was a series of conversations between Mr Bello and her sixteen year old intelligent and precocious daughter on the ‘facts of life’. These are topics which the book’s editor, Molara Wood, referred to on the book’s cover jacket as “everything a teenage girl ever wanted to know but was afraid to ask”.  Another part of the book’s blurb referred to it as “a parenting manual and a guidebook for young adults”.

The above notwithstanding, sociologists, educationists and policy makers as well as parents and guardians are still divided on how much ‘sensitive’ information especially on sex education should be divulged to teenagers.

For example, in a recent UK survey, more than half of parents do not think sex education should be taught to children at school. According to a poll by baby product website babychild.org.uk; “Many think it is inappropriate to teach children about sex, whilst others think it should be a parents’ choice to inform their own child.”

However on the other side of the coin, it is believed that just as Aliya put it in Sweet Sixteen, most teenagers are already aware of what adults seem to be hiding from them. According to one expert; “Comprehensive sex education doesn’t encourage kids to have sex. Just like abstinence-only programs, good comprehensive programs, teach students that abstinence is the only sure fire way to prevent pregnancy and STDs. The difference is that these programs also give students realistic and factual information about the safety of various sexual practices, and how to improve the odds.”

In writing Sweet Sixteen, Bolaji Abdullahi a former Nigerian Minister of Youths and Sports, among other previous jobs, must have critically weighed the above positions before taking on a smorgasbord of young adult topics that ranged from bullying, dating, stereotype, ethics and sex education among others. In pushing out his themes, the author found a good ally in Aliya Bello, a teenager with a curious, fascinating and inquisitive mind and a devoted as well as responsible father. Mr Bello, as expected of any good father, took responsibility for the education of his daughter including the tricky but very important aspect of sex education. Aliya was therefore fortunate to have a father who did not leave her to struggle alone with the demons that usually torment teenagers when awash in a flood of hormones and the pull of peer pressure.

The result is a compelling tale, loaded with morality and textured with a rich lyrical prose and young adult lingo…story-story, my bestie, OMG among others. The storyline has an upper middle class flavour with luxuriant meals, leisurely Saturday drives and a Mrs Bello the nurse, often distant from father and daughter. But in the hinterland between fact and fiction, the author was able to deftly sift the core values from the emotion, the treat from the trick and for this, parents and guardians will for ever be grateful.

This review was culled from Daily Trust

Review: A whole other world on ‘An Island’