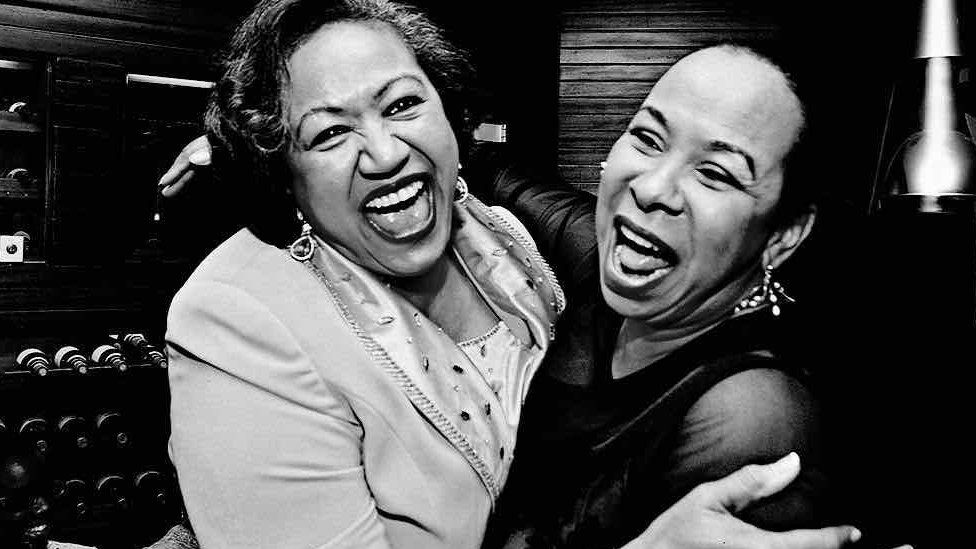 Capturing the heart of Nigeria – and Mandela’s socks

How a self-educated boy rose – via cutting the hair of Lagos’s elite – to become a celebrated photographer who has recorded significant events in Nigeria and beyond.

Sunmi Smart-Cole, now 78, remembers how as a teenager he left behind family problems to move in with a friend in Nigeria’s southern city of Port Harcourt.

He had completed primary school but had no means to fund his education to secondary school. With the little money he earned from a job teaching much younger children in a rural school, he bought a transistor radio. 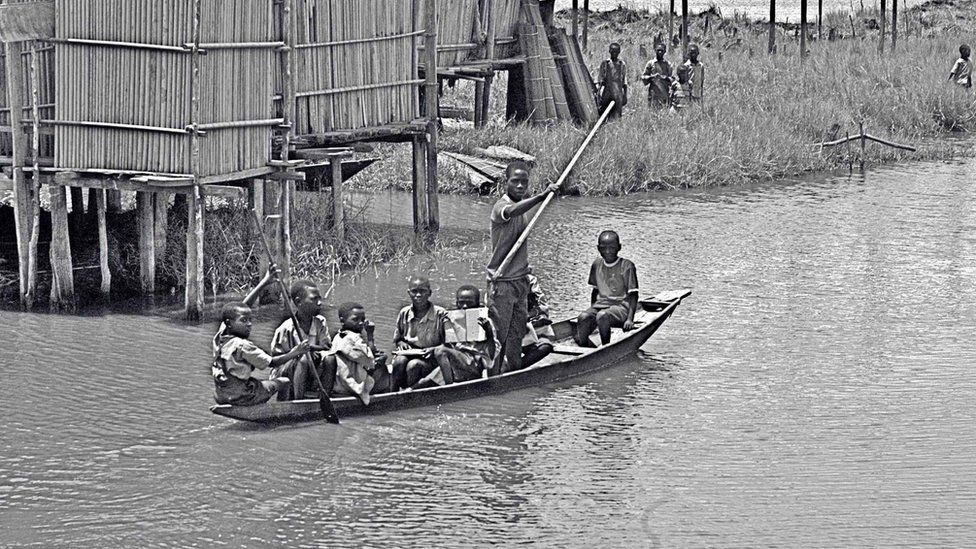 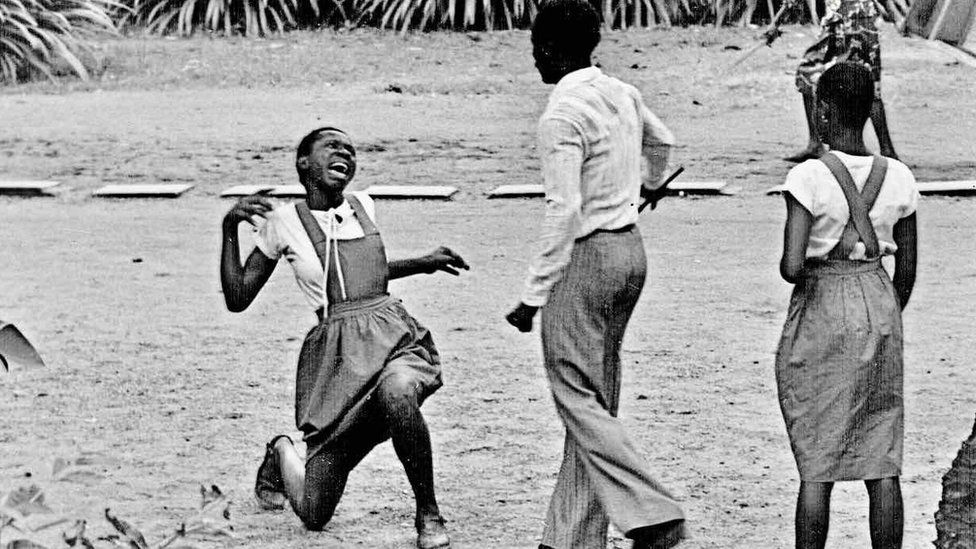 That was how he discovered and fell in love with the BBC World Service. The radio waves soon became his classroom and the presenters and announcers his teachers, making up for the formal education he could not afford.

“Every morning, I got up early and tuned the radio, and they read the news every hour on the hour. They had a programme called News of the African World,” he said. “I was in love with the British accent.”

Before then, he regularly purchased old copies of magazines like Time, Newsweek and National Geographic. He was fascinated by the new words he learnt, especially in the “increase your word power” section of Reader’s Digest.

“But the problem is, you could know all the words but how do you pronounce them?” he said. That problem was intensified in the predominantly Pidgin-speaking environment of Port Harcourt. “Many people spoke poorly and I didn’t want to join them,” he said.

By listening to the BBC, Smart-Cole learnt how to pronounce words correctly, and imbibed the sonorous tones of the newscasters. 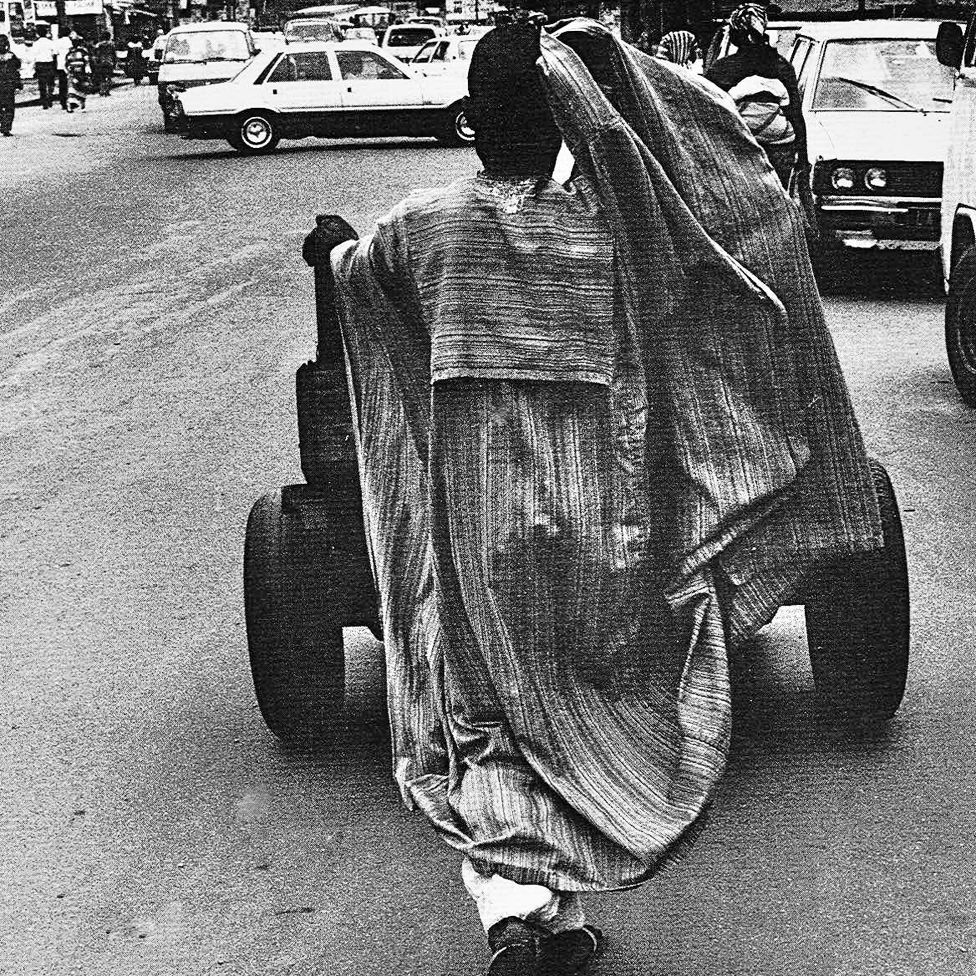 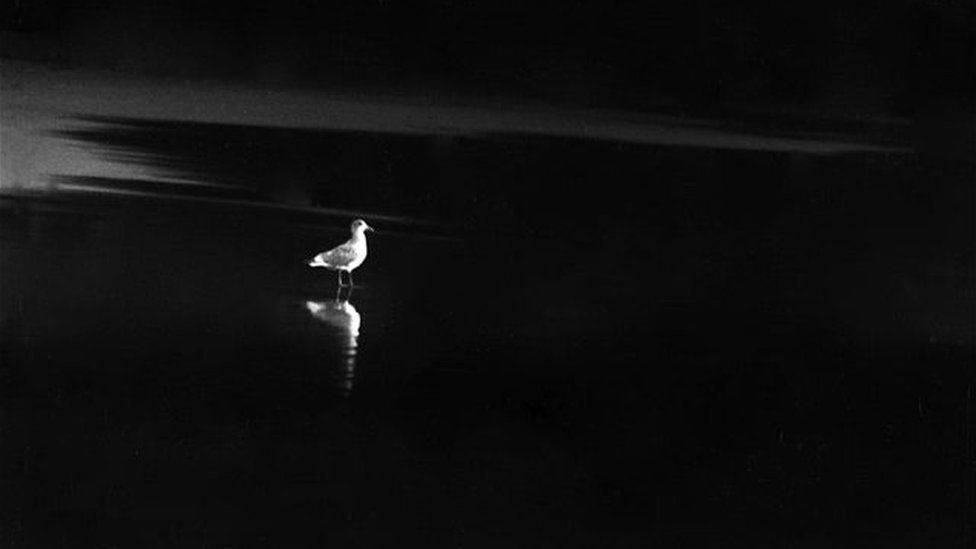 When he moved to Lagos and mingled with students from some of the most prestigious higher education institutions, few had any idea that his education had not gone beyond primary school.

Many people he met were fascinated by the vast knowledge he displayed in conversation.

“I had a girlfriend who went to Cambridge. Her father was a professor and her mother a professor. She said she was so surprised about my story and would not have believed it if I did not tell it to her,” he said.

But, as invaluable as the ability to speak excellent English in post-independence Nigeria was, Smart-Cole needed to earn a decent living and establish himself in some endeavour.

He got a job as a trainee draughtsman but was sacked months later when an audit of his personnel file showed that he had no school certificate. Many other organisations refused him employment for the same reason.

At various times he worked as a drummer for musician Fela Kuti, and in different jazz and soul bands.

Eventually, Smart-Cole decided to set up a barber’s shop where “decent people could get a decent haircut” and approached his friend’s father for assistance with the initial capital. The man was outraged. 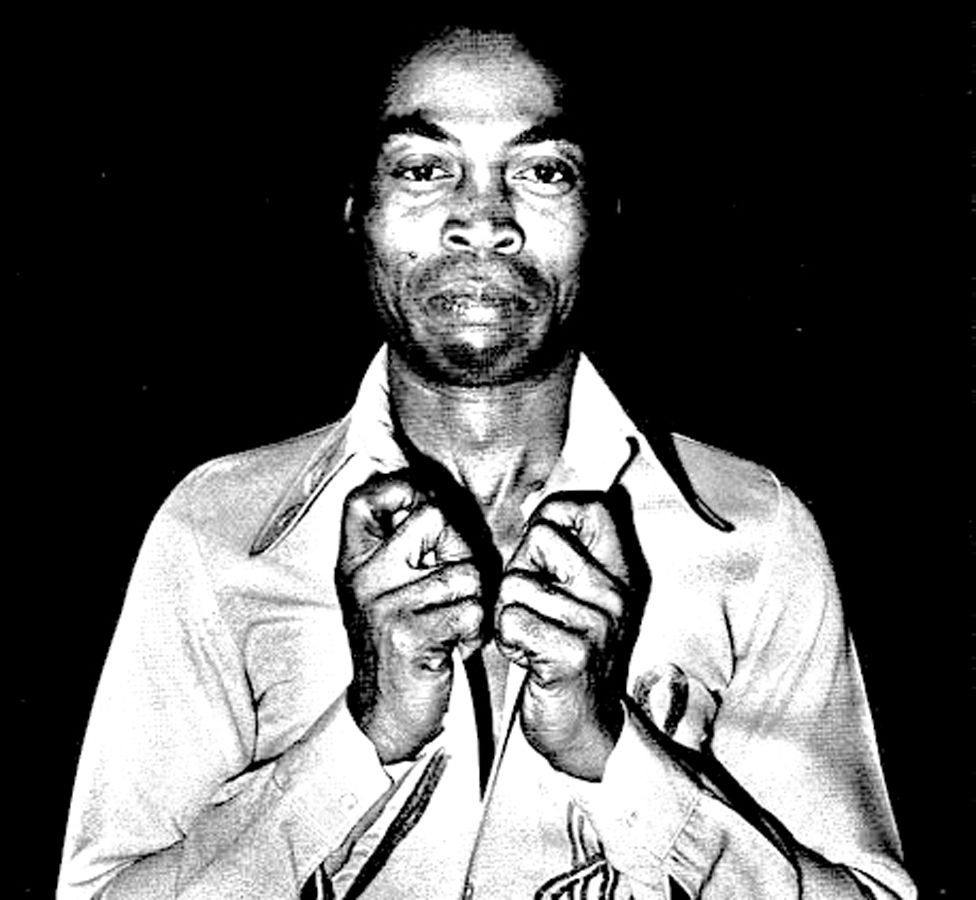 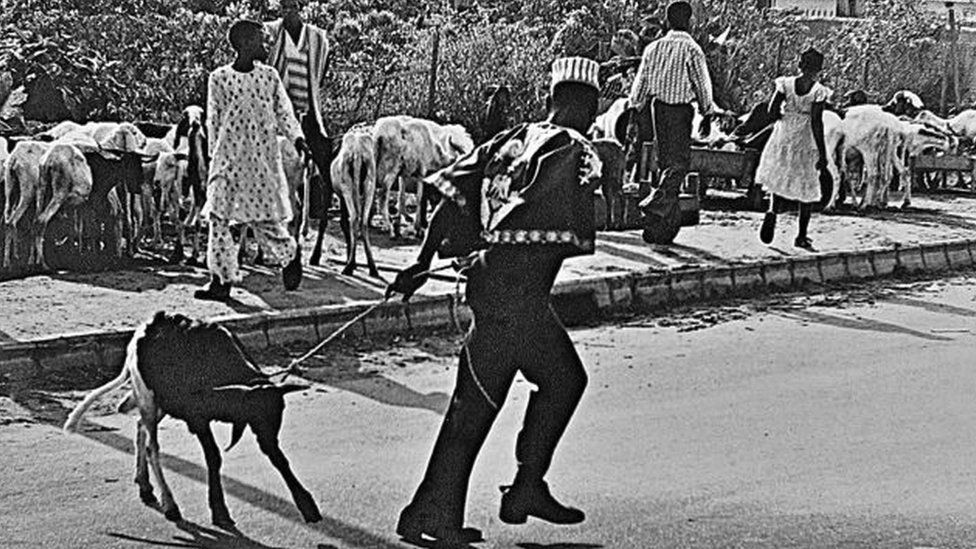 “He said he had always used me as an example to his sons,that I spoke very well. He told them to emulate me and now I wanted to go and do a low-class job,” he said.

But after Smart-Cole explained his situation, that he actually had no proper formal education, the man was both shocked and impressed.

He then agreed to give him the money: £20. Sunmi’s Place soon became the favourite barber shop of Lagos’s elite and expatriate community. His customers were treated to jazz music and copies of his favourite international magazines which Smart-Cole always had stacked.

One of his expatriate customers invited Smart-Cole to an event in Lagos where he met US civil rights activist Jesse Jackson, who then invited him to the US to attend a music festival in 1971.

Smart-Cole took another trip to America in 1976 and enrolled for a community college course in photography, which until then had been a side interest. 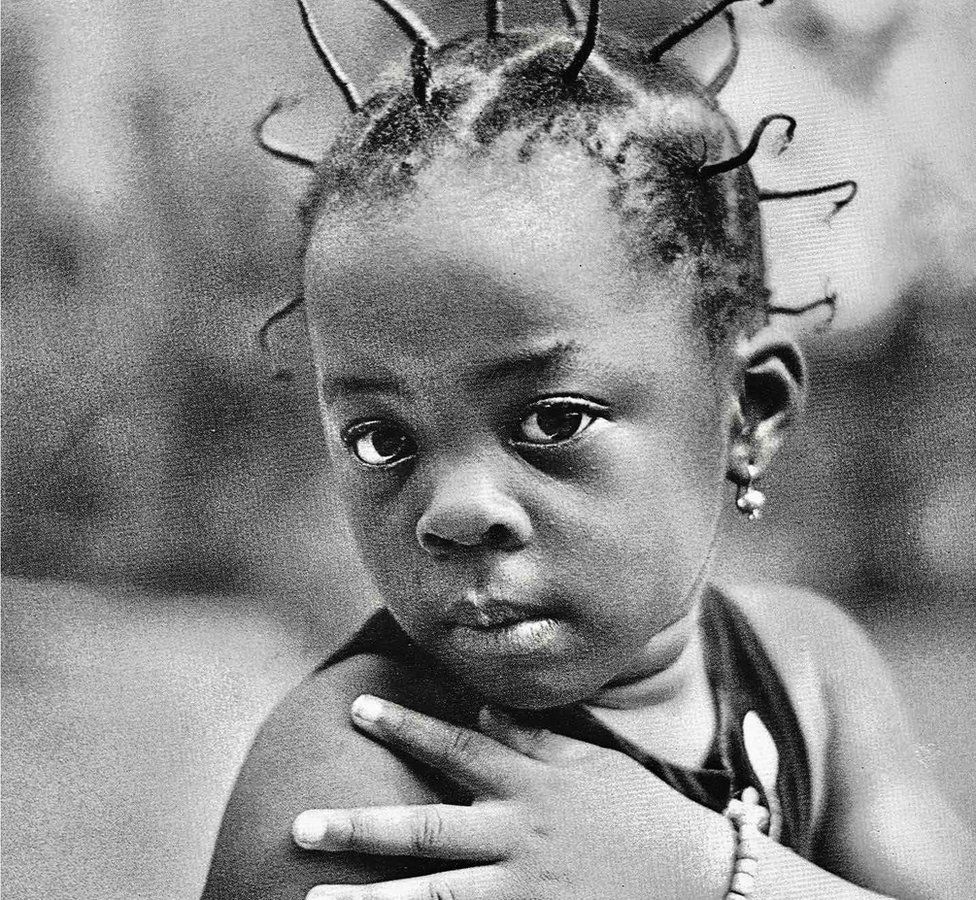 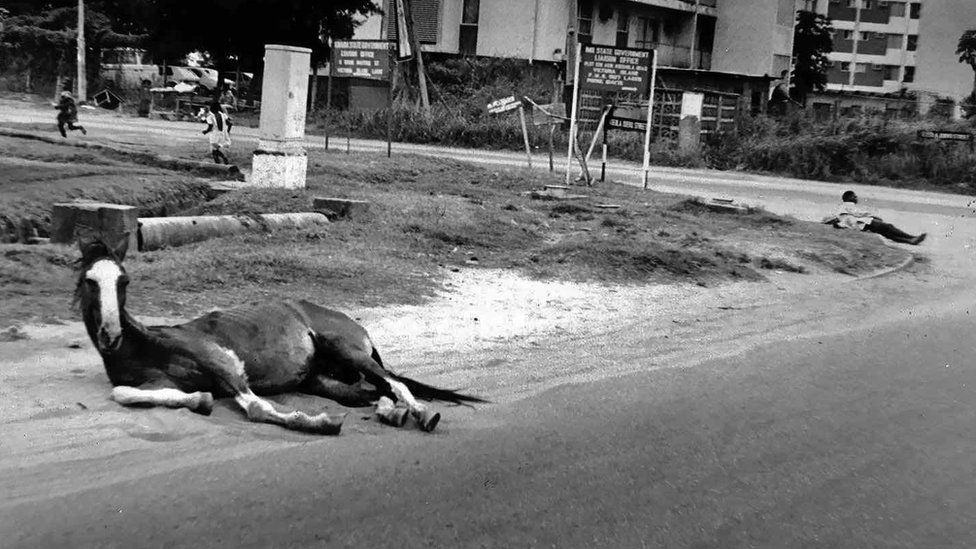 In 1978, he held his first solo exhibition, titled One-man Show, at Stanford University in California. That same year, he held his second exhibition at the National Theatre in Lagos. Since then, he has held exhibitions in five continents of the world.

In 1983, the year the civilian government in Nigeria was overthrown by a military coup led by Maj-Gen Muhammadu Buhari (now Nigeria’s elected president), Smart-Cole was invited to be the pioneer photo editor of Nigeria’s Guardian Newspaper. 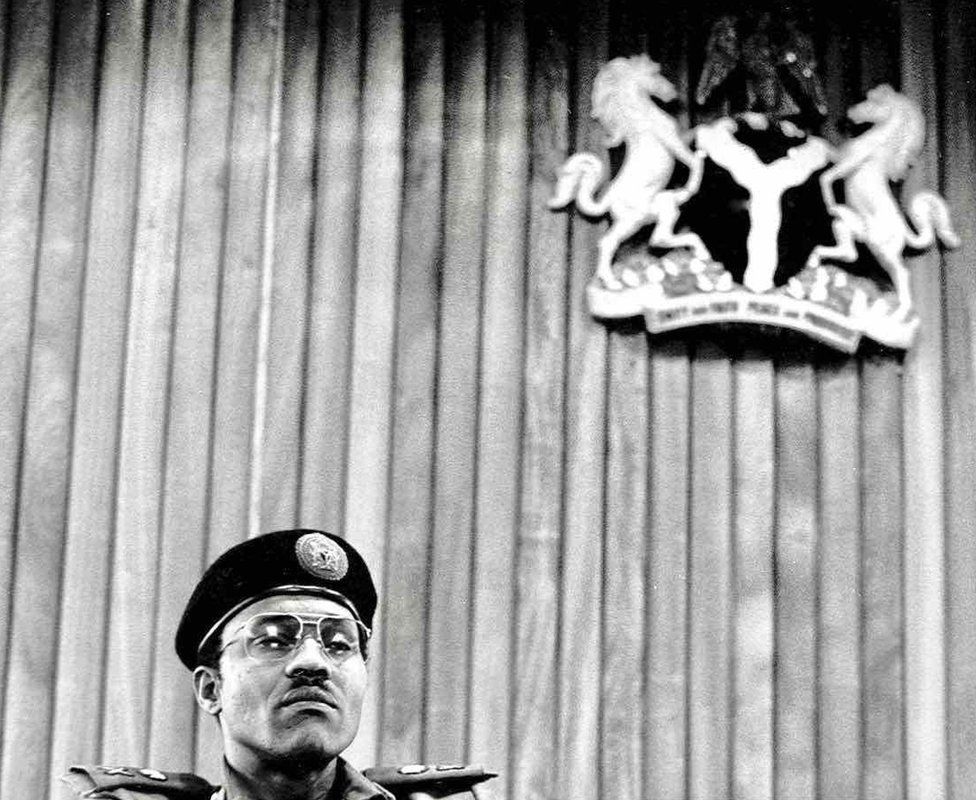 SUNMI SMART-COLE
Leaders: “Power!” (Gen Muhammadu Buhari) – 1984, a photo of Nigeria’s current president after he led a coup in 1983 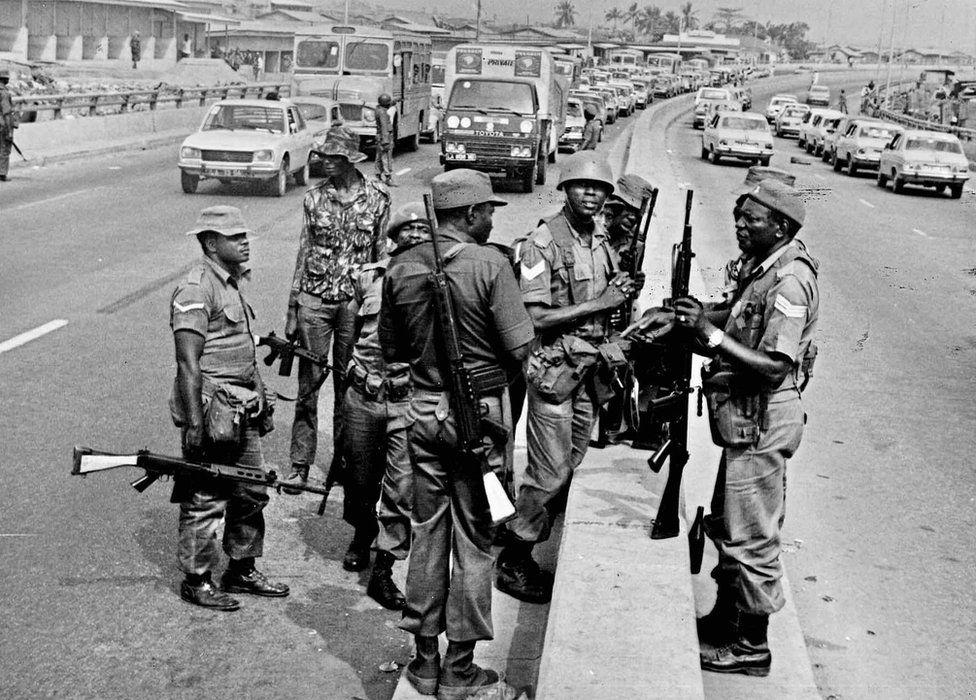 Every Sunday, a different one of his photographs was featured on the front page of the popular newspaper, usually with a witty title, increasing his popularity across the country. 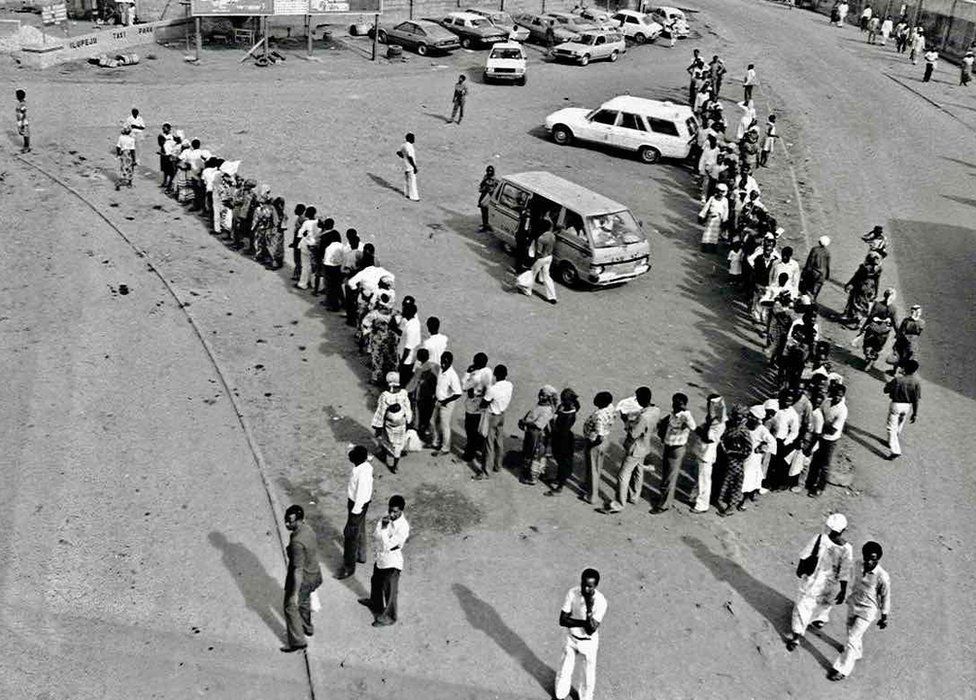 SUNMI SMART-COLE
History: “Why… No Buses” – 1984. During Gen Buhari’s “war against indiscipline”, Nigerians were forced to stand in queues – an unusual sight 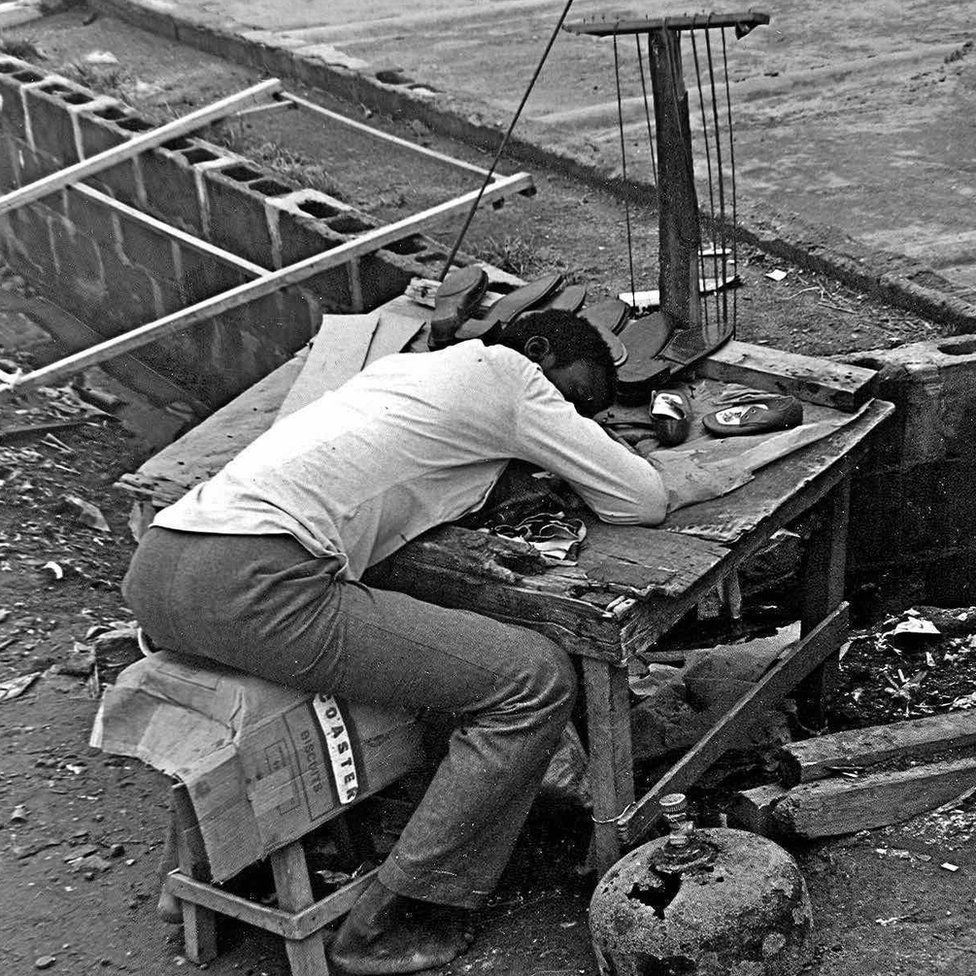 In the wake of a military coup in 1985, he stood with an eager group of journalists outside the Bonny Camp barracks in Lagos, waiting to see who would emerge as Nigeria’s new leader.

The image of a grinning Ibrahim Babangida that was wired around the world, giving the international community their first glimpse of Nigeria’s new head of state, was Smart-Cole’s. 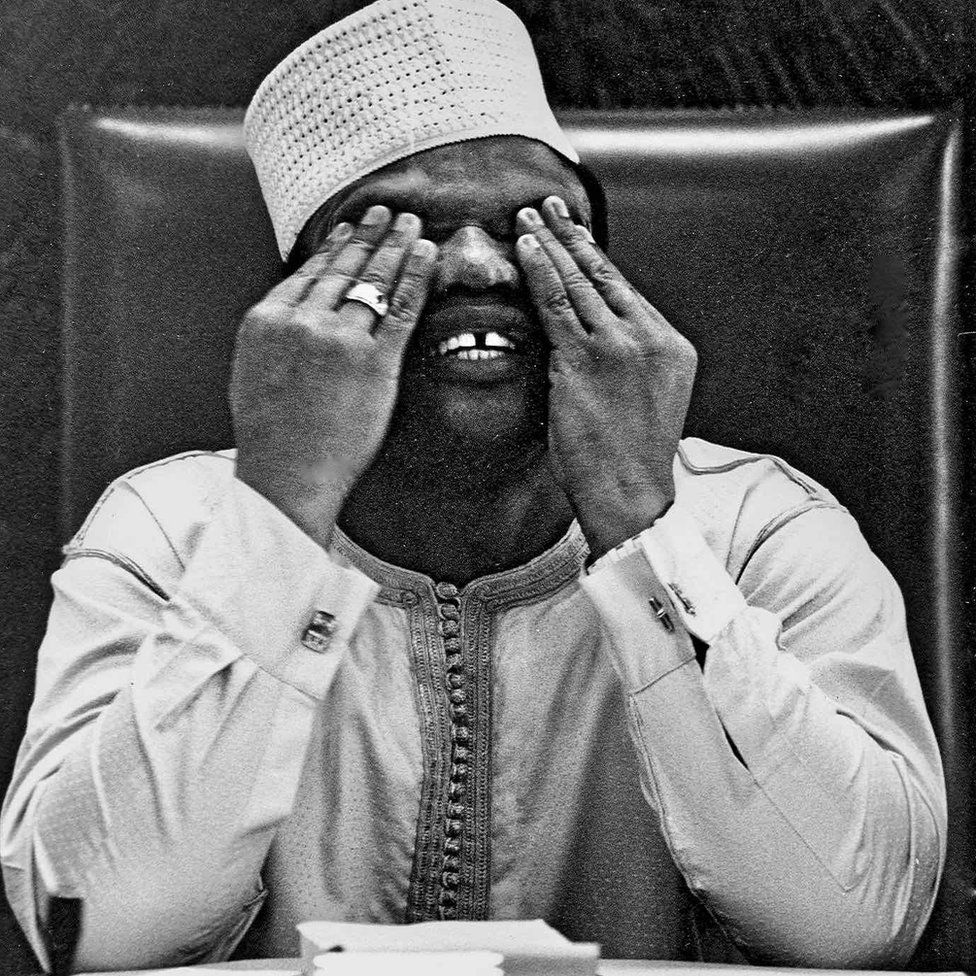 He eventually rose to become the managing editor of the Guardian, a position he held until he quit in 1989 and became a freelance photographer.

“Some of his most powerful images are his street snapshots,” wrote Jane Bryce, a professor of African Literature and Cinema, in the preface to Smart-Cole’s second book, Sunmi’s Lens – Medium Between Man and Nature.

“Heightened moments caught on the fly by someone who, we feel, is never off his guard, camera always at the ready for spontaneous outbreaks of human drama. 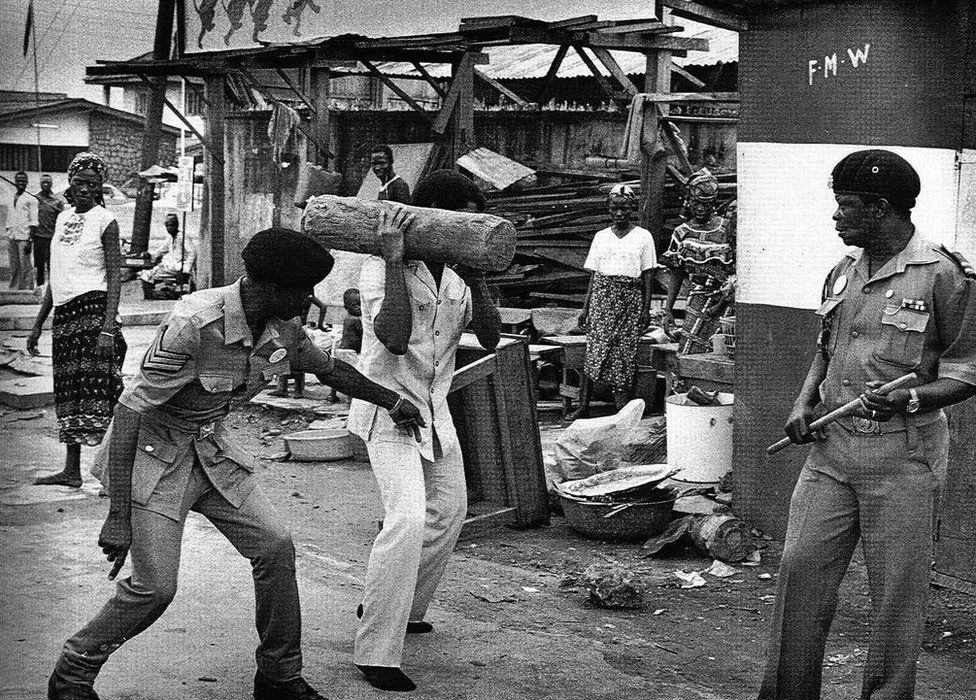 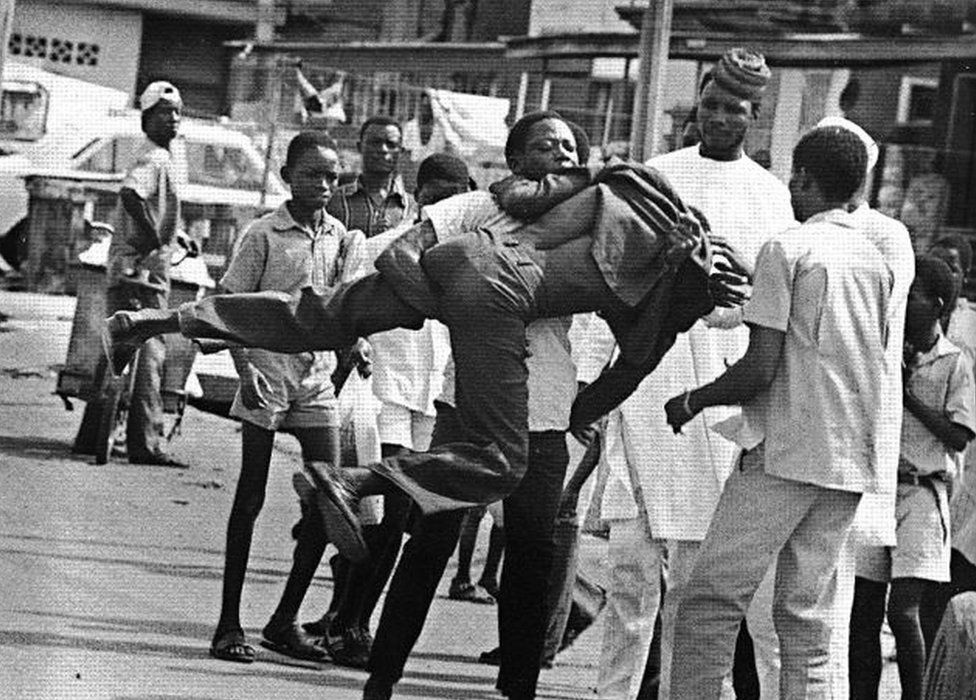 “A civil defence man and a mini-bus driver confront each other in tatters after a fight; a thief is made to crouch on his haunches by a policeman; another thief is tackled to the ground by plain clothes police outside a tube station in London; a boy does a back flip on a piece of waste ground.”

One afternoon circa 1989, a military vehicle pulled up in front of Smart-Cole’s residence in Lagos. Neighbours who saw him whisked away were worried that he had been arrested for some unknown offence.

But it was simply a summons from the then-First Lady, Maryam Babangida, who wanted him to take photographs of her one-year-old daughter.

Smart-Cole soon became the private photographer of the then-head of state, and also of several prominent families in Nigeria, thus earning him the status of Nigeria’s first celebrity photographer. 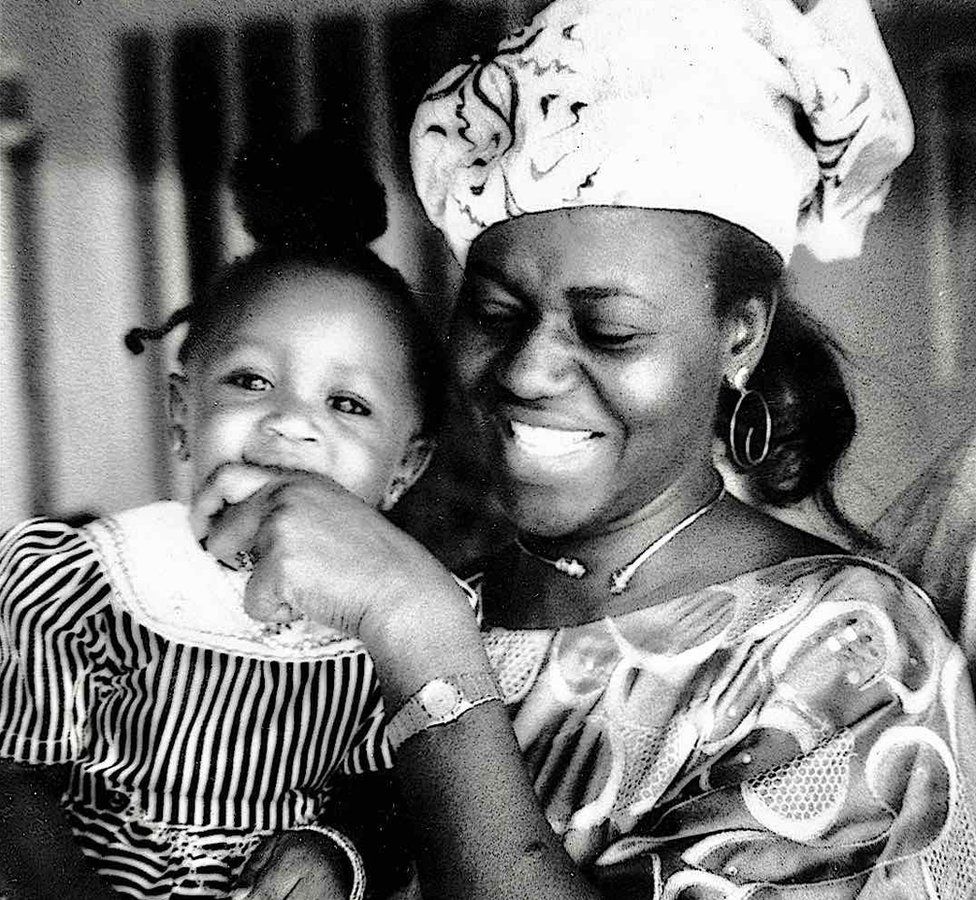 No high-profile event was complete if he was not there to capture the sights and faces and publish them in the ThisDay newspaper, where he was later appointed a contributing editor and director of photography. 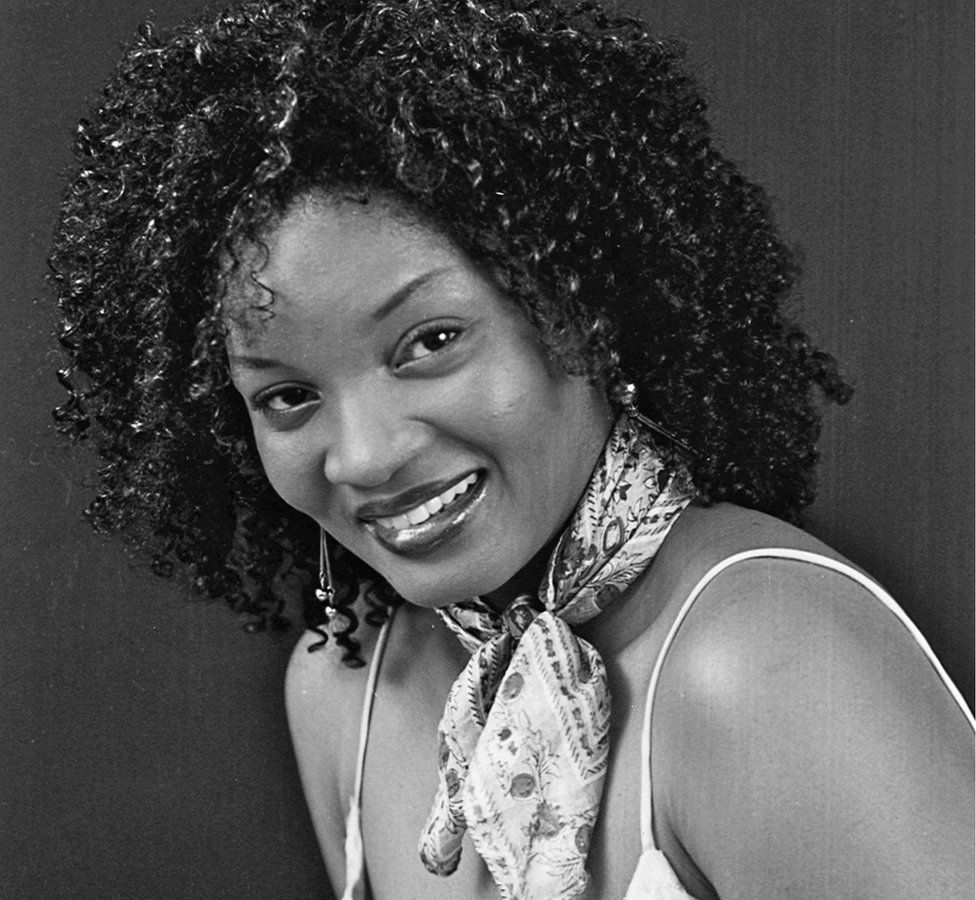 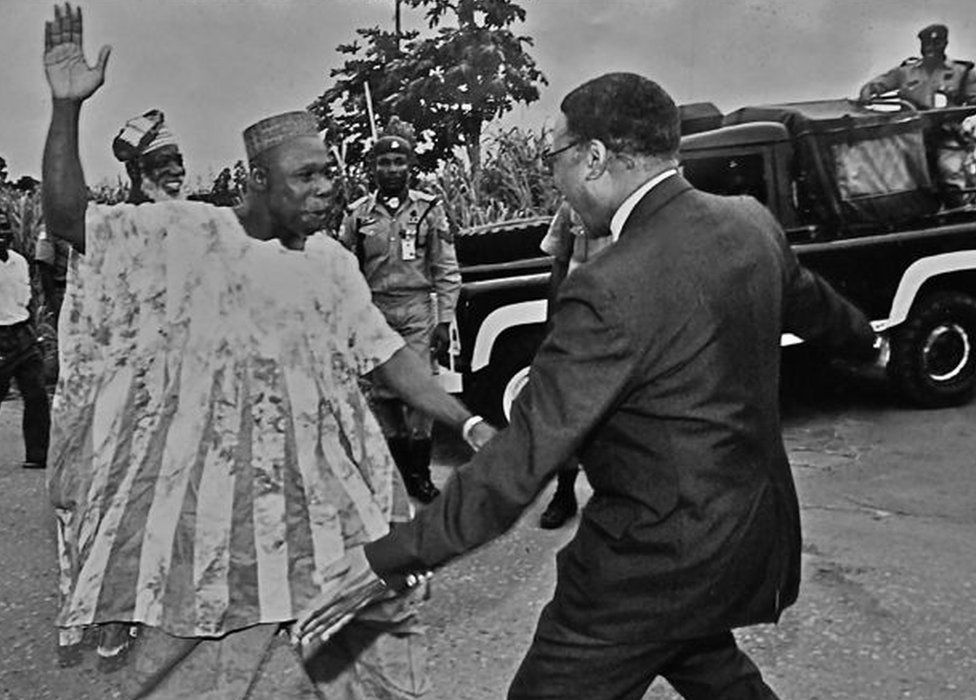 SUNMI SMART-COLE
History: “How to be a Nigerian” – 1998. Former military leader Olusegun Obasanjo (L) pictured a week after he left prison with the Commonwealth’s Emeka Anyaoku – and a year before he was elected president in the return to civilian rule

Smart-Cole turned down opportunities to work in an official capacity for subsequent Nigerian leaders, but his intimacy with power is revealed in a number of his portraits, such as a Nigerian leader rubbing his tired eyes, a major general asleep on a private jet, and Nelson Mandela with his shoes off. 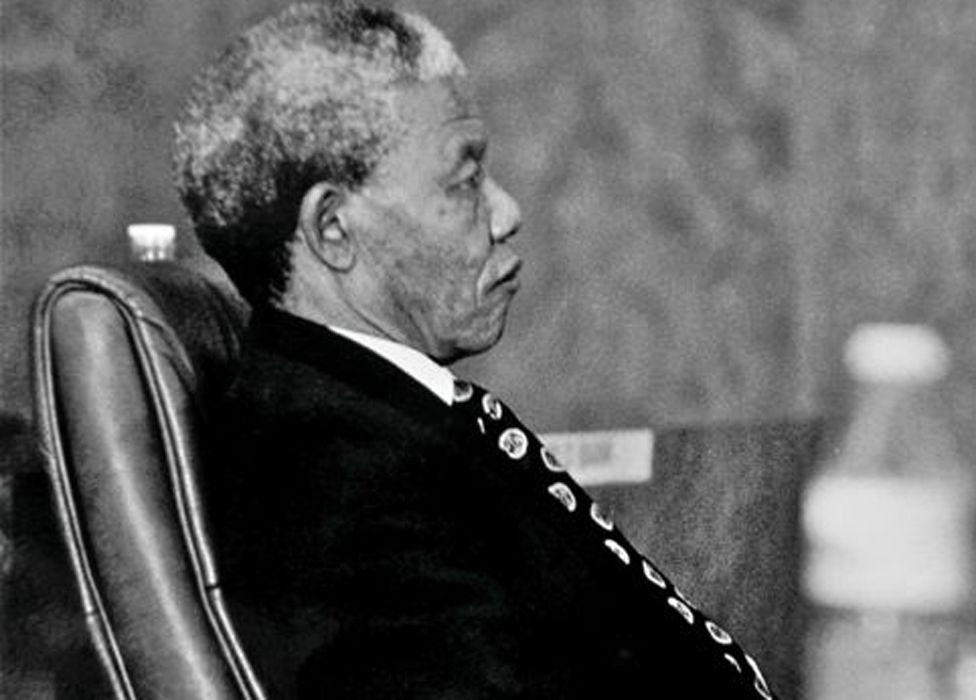 SUNMI SMART-COLE
Leaders: “The Ultimate Observer” – 1991. Nelson Mandela pictured the year after he left prison as he was negotiating an end to white-minority rule in South Africa 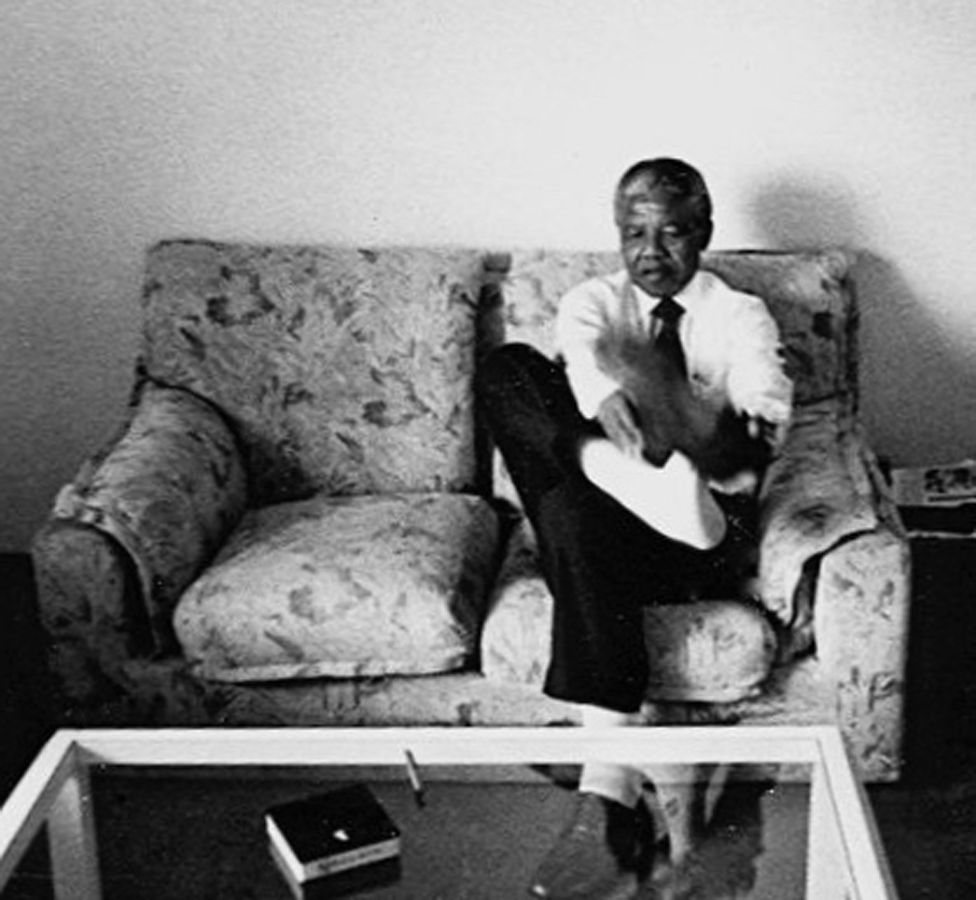 All these decades later, Smart-Cole’s attachment to the BBC has not waned, although he now watches more TV instead of listening to the radio. But, he doubts that he would have learnt as much as he did then if it were today.

“These days, it is not like before,” he said. “In the old days, people were made to write everything they put on air. They had to write it first and it was edited. But now, I don’t think so.” 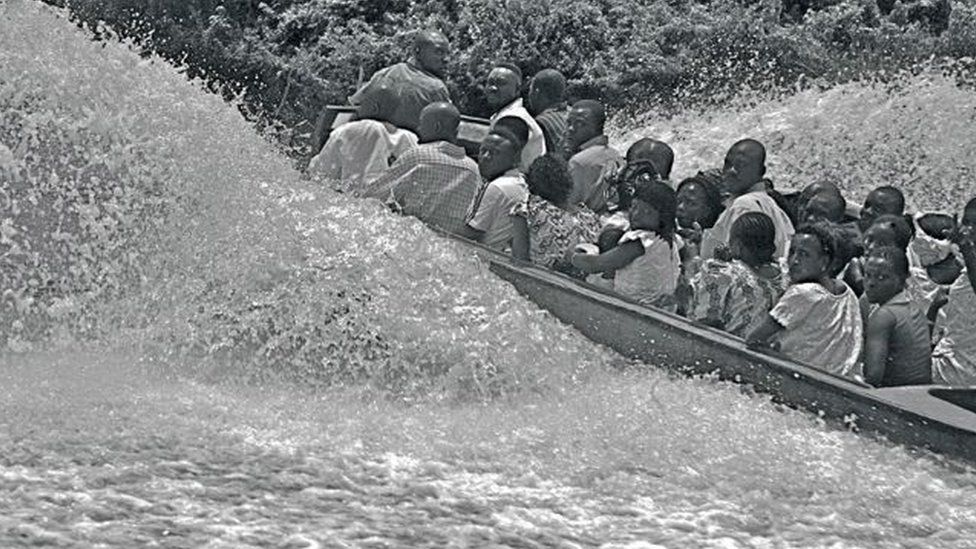 Today, Smart-Cole still takes photographs, although not for commercial purposes. He prefers his professional camera, and maintains that there is a distinction between photos such as those which he takes and those taken with a phone, such as selfies.

“They take ‘snaps’, not photographs,” he said. “It’s OK for people who want to see what they look like before they go out every morning, but that’s not photography.

“Before, you couldn’t catch such memories. You had to get somebody else to take it. It’s OK for today but not for something that will last.” 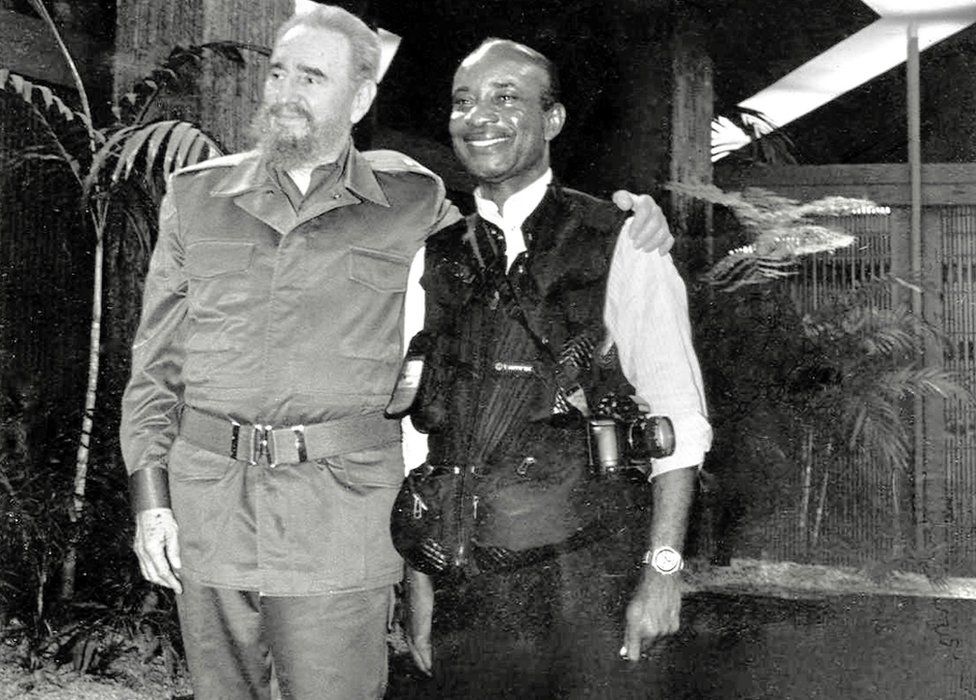 CUBA’S MINISTRY OF INFORMATION
This is one of Sunmi Smart-Cole’s favourite photos of himself, taken in 1999 with Cuba’s then-leader Fidel Castro in Havana

Article was culled from BBC
The following two tabs change content below.

Adaobi Tricia Nwaubani is a novelist, journalist, essayist, and humorist. Based in Abuja, Nigeria, she is the first contemporary African writer to launch a global career while fully domiciled in her home country. Her debut novel, I Do Not Come to You by Chance, won the Commonwealth Writers Prize for Best First Book (Africa). Her debut Young Adult novel, Buried Beneath the Baobab Tree, based on dozens of interviews with women and girls kidnapped by terrorist group Boko Haram, was published by HarperCollins in September 2018. It won the 2018 Raven Award for Excellence in Arts and Entertainment, and was named as one of the American Library Association's Best Fiction for Young Adults. Her essays and reportage have been featured in dozens of publications around the world, including: The New Yorker, Guardian, and New York Times. She writes a regular column for the BBC's 'Letter from Africa'.

Adaobi Tricia Nwaubani is a novelist, journalist, essayist, and humorist. Based in Abuja, Nigeria, she is the first contemporary African writer to launch a global career while fully domiciled in her home country. Her debut novel, I Do Not Come to You by Chance, won the Commonwealth Writers Prize for Best First Book (Africa).

Her debut Young Adult novel, Buried Beneath the Baobab Tree, based on dozens of interviews with women and girls kidnapped by terrorist group Boko Haram, was published by HarperCollins in September 2018. It won the 2018 Raven Award for Excellence in Arts and Entertainment, and was named as one of the American Library Association's Best Fiction for Young Adults.

Her essays and reportage have been featured in dozens of publications around the world, including: The New Yorker, Guardian, and New York Times. She writes a regular column for the BBC's 'Letter from Africa'.
Share: