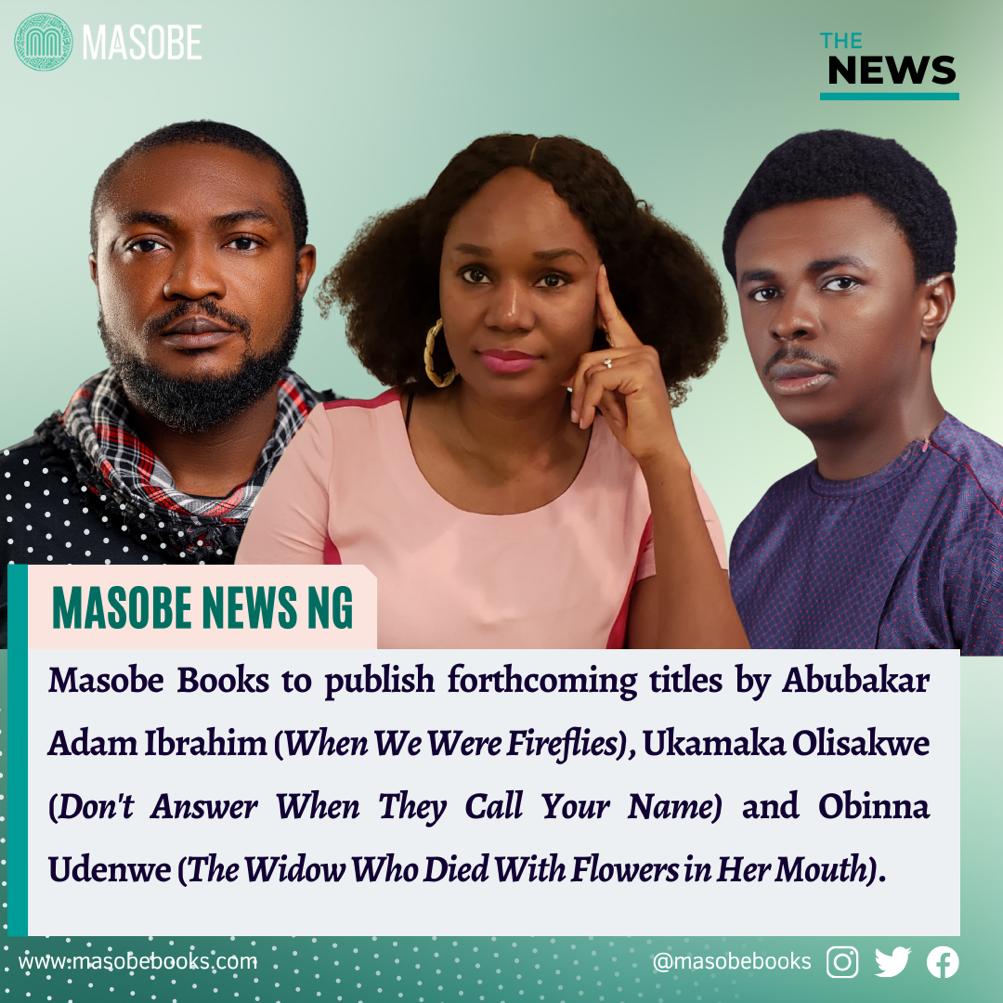 As part of ongoing commitment by Masobe Books – Nigeria’s number one publishing house, to discovering and supporting outstanding literary work, We are pleased to formally announce the acquisition of the following extraordinary manuscripts from three uniquely talented writers. These are storytellers that are contributing to the shaping of the African literary space whilst garnering accolades at home and abroad.

Abubakar Adam Ibrahim
When We Were Fireflies is Abubakar’s fourth book and second novel; coming almost seven years after his NLNG win. It is a literary portrait about the intersection of love, loss and memory. Abubakar’s skill and prowess as a writer with unparalleled imagination and a flair for the surreal within the ordinary is brought to bear with the scope and detail covered in this beautiful story.

When brooding artist, Yarima Lalo, encounters a moving train for the first time, two serendipitous events occur. First, it triggers memories of past lives in which he was twice murdered—once on a train. He also meets Aziza, a woman with a complicated past of her own, who becomes key to helping him understand what he is experiencing. With a third death in his current life imminent, together they go hunting for remnants of his past lives. Will they find evidence that his mind is unravelling or discover lost loves and enemies from a forgotten past?

When We Were Fireflies has been critically appraised as:

“A gripping, layered, passionate and haunting novel with tones of otherworldliness.  Abubakar’s prose sparkles with poetry, wisdom and compassion. This is a complex and unforgettable story that will keep you up at night.”

—Bisi Adjapon, author of The Teller of Secrets.

“A gorgeous novel, written in page after page of achingly beautiful prose. Ibrahim asks us to reckon with profound and urgent questions about grief, war, and memory. In the midst of all of this also rests a spellbinding tale of love and loss – and a reminder of the redemptive possibilities that exist when we are unafraid of tenderness and compassion.”

—Maaza Mengiste, author of The Shadow King, shortlisted for the 2020 Booker Prize

“A compelling narrative from one of the best writers of our generation. Abubakar Adam Ibrahim’s imagination is as beautifully thrilling as his prose is exquisite.”

—Zukiswa Wanner, author of The Madams.

About the Author
Abubakar Adam Ibrahim is a Nigerian creative writer and journalist. His debut short-story collection The Whispering Trees was longlisted for the inaugural Etisalat Prize for Literature in 2014, with the title story shortlisted for the Caine Prize for African Writing.

Ibrahim has won the BBC African Performance Prize and the ANA Plateau/Amatu Braide Prize for Prose in 2014. He was selected for the Africa39 list of writers aged under 40 with potential and talent to define future trends in African literature.

He won Africa’s largest literary prize, The Nigerian Prize for Literature for his first novel, Season of Crimson Blossoms, in 2016.

Ukamaka Olisakwe
Ukamaka’s sophomore novel and YA debut, Don’t Answer When They Call Your Name is set in a fantasy multiverse rooted in Igbo mythology—imagine The Hunger Games set in Ben Okri’s The Famished Road. This is a story about an aja who decides that it is time to wrest power from a merciless deity.

When the streams suddenly run dry in Ani Mmadu, the people know it is time to atone for a sin that goes back to the very beginning of their world; the consequence of one woman’s rebellion against the all-powerful and unforgiving, jealous god. To avert this catastrophe and for the waters to flow and nourish the farms again, the people must send an Aja—a child chosen by the Oracle—into the Forest of Iniquity, to atone for that great Sin. It falls on young Adanne to save her people this time. But the Ajas sent into the dreaded forest tend never to return. Is Adanne the long-awaited one who will buck the trend and end her people’s suffering?

Don’t Answer When They Call Your Name is an extraordinary novel bursting with kaleidoscopic worlds and beings. It is a feat of the imagination from a natural storyteller.

Ukamaka and her work have been critically appraised:

“In her latest novel, Ukamaka Olisakwe blends myths and magic to introduce readers to an enchanting, spectral world where a young girl and her dog must change the destiny of an ill-fated community. Olisakwe proves yet again that she delights in crafting stories as layered as an aged tree and finely textured as petals. This book is an adventure, a fantastic adventure for anyone seeking a thrill.”

About the Author
Ukamaka Olisakwe was born in Kano, Nigeria, and now lives in Vermillion, SD. A UNESCO-World Book Capital “Africa 39” honouree and a University of Iowa’s International Writing Program Fellow, she is a winner of the VCFA Emerging Writer Scholarship; the SprinNg Women Authors Prize; a finalist for the Miles Morland Scholarship and the Brittle Paper Award for Creative Nonfiction, and runner-up for the Gerald Kraak Prize, among other honours. She is the founder of Isele Magazine and The Body Conversation.

Obinna Udenwe
In Obinna Udenwe’s first collection of short stories, The Widow Who Died with Flowers in Her Mouth, he opens a window into Nigerian life and gives readers an unvarnished look at the country and its people in all of their thrilling, titillating, and terrible glory.

Ordinary people find, and fashion themselves into and within far-from-ordinary situations In The Widow Who Died with Flowers in Her Mouth. A beautiful woman half-naked body is discovered to the shock of her community; but is the killer one of her wealthy suitors? A plumber is treated to an intense sexual experience by a woman with cash, curves, and killer moves—but is she who he thinks she is? A young doctor reaches the edge of sanity after a forbidden entanglement with a married woman. A sexually promiscuous tailor’s return to her father’s house immediately sparks lust, jealousy, chaos, and violence.

The author and his work have been critically appraised:

“Obinna Udenwe has earned his place as one of Africa’s emerging voices—a talented and daring writer. His eye for detail and human emotions are sharp. This collection is a dazzling display. Pay attention to this writer—he is telling us a lot about modern African life.”

“The stories in this collection cover a variety of subjects, yet all are united by a sense of frustration. Whether examining broader social and political frustrations or the more private and individual ones, Obinna Udenwe writes with a steady and unflinching focus.”

—Karen Jennings, author of An Island, longlisted for the 2021 Booker Prize

His short stories have won The Prairie Schooner-Glenna Luschei Prize 2020, The Short Story is Dead Prize 2016 and was a finalist in the Prairie Schooner-Raz Schumakar Prize 2020. His story It Has to do With Emilia was acquired for film & television in 2020 by Bridget Pickering at Bump films, shot in Yeoville, South Africa in 2021 and released as a motion picture in March 2022. His stories have appeared in Gutter Magazine, Prairie Schooner, Munyori Literary Journal, The Village Square Journal, Fiction 365, Brittle Paper, ANA Review, Ake Review, Expound Magazine, The Kalahari Review, The Short Story is Dead anthology Vol., 1 & 2, and many more.

He lives in Abakaliki in southern Nigeria where he works as a writer, engineer, and farmer, and is very active in local politics.

The books are scheduled for release in the first and second quarters of 2023. Specific publication dates and cover reveals will be announced in the coming weeks.  For more information, please contact: Theresa Ominiabohs at 07018383286, email: info@masobebooks.com, follow us @Masobebooks on Instagram and Twitter, or visit the Masobe Books website at www.masobebooks.com