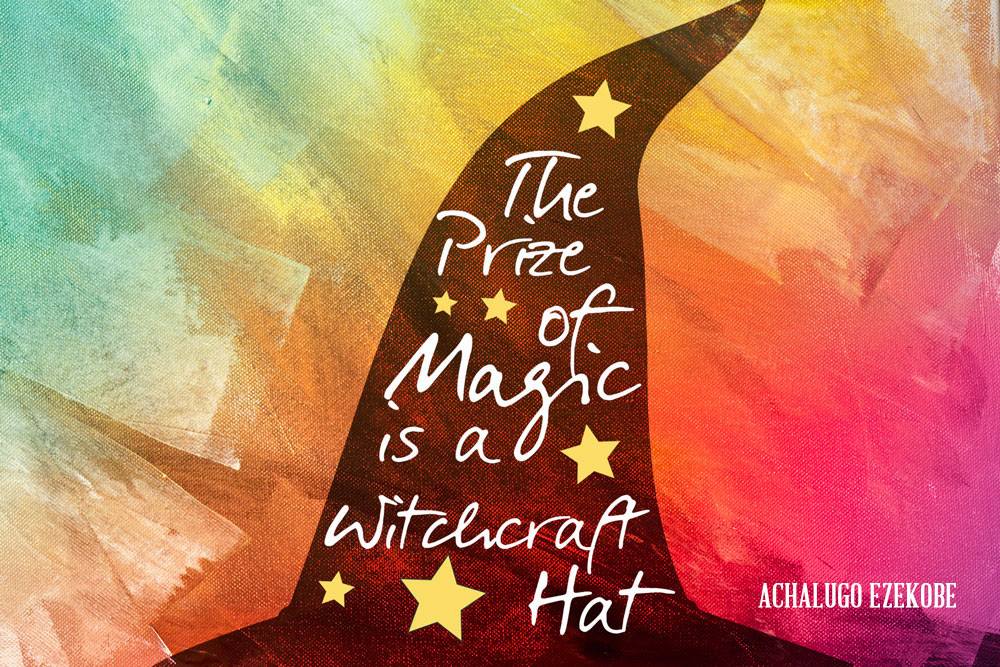 A few years ago, you enjoyed the look of pleasure and sometimes, bonus, on the face of your Managing partner when the company would have been in a fix and you would raise your ‘smart Alec’ hands and announce that you could –and went ahead to fix it in record time. You were all rarely in a fix, you all had a detailed outline and approach to whatever brief your client had sent and except someone grew three heads overnight and decided to ruin it all, this outline worked. So when the rare bit happened, the adrenaline was welcome, as they say, you emerge stronger.

You wake up some mornings and after praying, you begin to chant oriki to yourself, because you need it, after all, you are no longer mere mortal…

A few years after, you are in a space where short notices and hitches are more normal than not. An email can change your entire day, night and week. You are now looking at the adrenaline and wondering what made you enjoy the rush all those years, familiarity has bred contempt, adrenaline is filth, adrenaline is scum, you hate adrenaline.

You begin to get worried about how frequently the workload brings this your new found enemy your way, you want to send a message to your doctor friend, Jide –but that one has succumbed to the mass exit of doctors from your country. You hiss in anger that he left, what is in sewing or any other thing that he couldn’t have stayed to do? You call him lazy in your mind, not because he is, but because you are angry that he has gone off to a place where the system may work better for him and you are still here –swimming in adrenaline from work and Lagos traffic. Something tells you that you can still send him a message on WhatsApp, but you decide that out of place is out of touch, Dr. Jide can only speak on foreign adrenaline side effects now.

The price of magic is a witchcraft hat, you scribble as title

So you do what everyone does most times, you visit Dr. Google, the first result shows you symptoms, that is not what you asked. 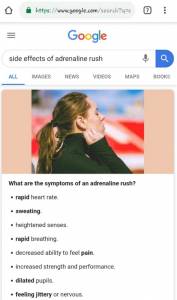 So you glance through and decide to open another, that is when you find what you what. That the side effects of repeated adrenaline release are: a weakened immune system, peptic ulcers, cardiovascular disorders, premature aging, tumor growth, miscarriages, depression and exacerbated anxiety. You laugh at the miscarriage bit –you that you are now making conscious effort to keep up with your sex life. As for the rest, you shudder and do what most citizens like you do, Holy ghost insurance, you soak yourself in the ever precious blood of Jesus. You visualize yourself thoroughly soaked like bread in a tea cup of morning in 1998.

You wake up some mornings and after praying, you begin to chant oriki to yourself, because you need it, after all, you are no longer mere mortal, acing brief after brief at short notice, smiling when the emails come in with “treat as urgent”, you swear to yourself that you are now a magician. What do you do for a living? Magic! You answer…if anyone disagrees, may their follow come charger blow, nitwits! (You have written a swear word here, but you erase it and leave nitwits, it is not in your character, damn that adrenaline! –besides, what if people share this article? No one would believe your tale of still being a virgin).

You decide that you aren’t alone in this magic thing, you decide to ask your fellow magicians. You start with Bukky, who has attained heights you are yet to climb –Bukky has slept at work timelessly over a client’s deliverables. She admits that working under pressure is now her life, and that though she delivers, the down part is that she isn’t able to be as creative under intense pressure. She quips in that she finds too many reverts annoying. Her response has a typo, she explains that she was in a meeting, you laugh –of course you too a typo pro these days.

Your friend sends you a message, straight out letting you know that you missed his comedy show on sunday

Koch lets you know that he has long adapted and that even though the best ideas don’t come out under pressure, the key thing is that something is delivered eventually.

You hmmn and aaahh under the anointing, the rhema is powerful! So you think to yourself, that maybe what is important is doing the work, even if it is not your personal best. Your guardian spirit whispers to you, and his warning is as gentle as breeze after rain ‘Acha, don’t let the devil use you’.

You send a message to Kenny, that one is shouting everywhere, typing in Caps lock. You decide to leave him alone, because negative vibes are not your thing. If he is too mad, he should go and vent with an article, you are not a shrink, psychologist, you are not even his mommy, so please he must find his way and leave you out of it. He later explains that he wasn’t typing caps on purpose, but this was a fine paragraph and you don’t want to delete it. 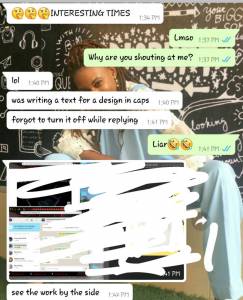 Chinyere has not replied, that one? She works in financial services sector, you know that she will reply you weeks after with ‘Acha, I went to Abuja then Port Harcourt and Uyo, in fact I got back last night and I am going to Kafanchan tomorrow. That one has a mad schedule and the annoying thing for you is that she still has quite a voluptuous behind –whilst you, you, you have lost all your curves from stress and a shitty diet. Mscheew!

You have a phone conversation with Layi, you laugh at your realities and agree that you are here all the same, and the present is what matters.

Your friend sends you a message, straight out letting you know that you missed his comedy show on sunday. You sigh, you had tried to hide under people’s IG stories and pretend you were there. You decide to just say the truth, that you were tired and sleep deprived. He understands, forgives, and lets you know what could have happened if you were honest on the day. You sigh again, another time you must have sense.

Harry (not real name), gists you of the times he has delivered under pressure, admits that it is not good for some people, and then resolves that it is what obtains in our industry –then lets you know that he would prefer to remain anonymous. 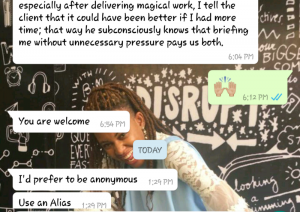 You chuckle, because Koch has sent you a dm granting you express permission to use his identity. 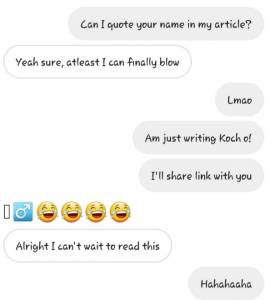 You wonder though, that Koch trusts you so much, that you are not writing up a storm, but Harry cannot risk you at all.

We all agree that Magic is awesome, working magic is great! The price of magic is a witchcraft hat, you scribble as title. What you really mean is that the result of good work (under pressure), is more work (under pressure) –but if you write it in plain English like that, how will they know that you do not handle words like a mere mortal?

But you wonder deep inside at the reality, that when you begin to deliver like this all the time, you could be given not just a magic wand, but a hat.

Those long ones you saw in colored storybooks and cartoons growing up, that symbol that you are now a full-fledged witch.

Achalugo Ezekobe studied Law at the University of Lagos. She has enjoyed tremendous experience exploring her storytelling vis-a-vis several mediums of expression, which have over the years, extended to photography, film/tv and stage.
.
Her creative non fiction and fiction have appeared in several magazines and websites, including Bella Naija (Common denominator and Mama Bene), an ebook on Okadabooks 'Don't write on me'. Her stage play 'Mr.Brother', was third runner up at the ANA 2018 prize for drama.

Her creative non fiction is popular for it's humor laced approach to sharing real life narratives, while her fiction has in recent times, found expression in the speculative fiction genre.

Achalugo Ezekobe is author of 'Boys on jumping trousers', 2nd runner up, Quramo 2018 prize for unpublished fiction. The book is a gripping story of grief and friendship, slated for release in 2019.